skip to main | skip to sidebar

Shadow of the Destroyer's "Harbingers of the Dark Truth"


Jabladav- Ben, Thanks for letting me post your first release, I couldn't think of a better release to start this blog off. Give us a little history of SOTD...

It started off with just Nate (our first drummer) and myself around November 2006. It took us a long time to get the line up we have now but we are all very happy with it. Guitars, bass, and vocals have been the same since we became a full band but we have been through a lot of drummers in the past three years. After we lost our second drummer Justin, we started having practice with his drum tracks from our first demo played through an ipod into our PA. It was almost impossible to hear the drums clearly which really crushed our motivation for a while. None of us ever want to have to do that again. Justin moved back after being gone a year and took back his position in the band which had recently become open again. We are back to our original complete line up and moving forward once again so be ready for more releases in the near future.

Jabladav-Can't help to hear some Weakling influenced guitar tones, is this a fair comment? What are the bands influences and what are you currently listening to?

We are all big fans of Weakling for sure so having a similar tone is definitely not a bad thing.  I think at least for me my sound was less intended and more of result of the equipment I played, and still play through.  I bought a tube head for our band and I just play on the high gain channel with everything cranked except for my tone knobs.  I like to keep my set up simple, I don't need a pedal board with 20 different effects to get a sound I like.  As far as influences go theres a lot.  Some of my influences are musical, some stem from my own inner darkness, others come from nature and its own dark powers, and definitelty my disgust for religion and the small minded sheep that follow it.
Right now I'm listening to Urgehal  "Through Thick Fog Till Death", lately I have been listening to a heavy rotation of Urgehal, Funeral Mist, Dagon, Glorior Belli, Watain, and Mutilation.

Jabladav- For the gear heads out there, what are you currently using?

Jabladav- Tell us about the upcoming release and its direction?
The new release is much darker and more brutal than the first.  Harbinger's of a Dark truth is two years old so we have progressed a lot as a band since then.  I think our new material is the embodiment of the darkness that we posess, we want our music to make you feel like you're watching the death of humankind through a swirling cloud of blackened fog that chokes you're every breath.  This is the direction of this release and future ones as well,which is pure vengeance, disgust, and hatred.

Jabladav- How can people buy your music?
You can get it through us at our shows and at a few local record stores, but as far as distros goes we don't have that worked out yet.


buy here: www.staticagerecords.com
Jabladav- Final comments?
I just want to let everyone know that our upcoming release should be out before the end of January and will post the actual date on our myspace page as soon as its available.
Thanks for the interview and putting us up on your blogspot. Hails 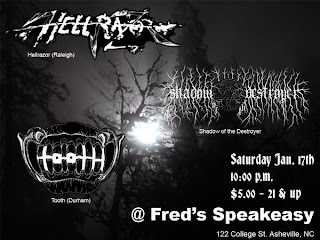 Shadow of the Destroyer
see them here:  http://www.youtube.com/watch?v=IZxnu6D8L2U
Posted by jabladav at 12:14 PM

jabladav
Jabladav was born in 1995. An improv of three musicians that came from three different backgrounds of music. James(ja) ala Reign/Asylum/Branch Quartet was the bassist(me) came from the classical/metal influence,Blake(bla) ala Shadowfax/Dubzilla/Food/L.A session drummer came from the Tabla/Africian/Dub school and David(dav) old-school session ripper and member of award winning Blue Dogs,Branch Quartet. Jabladav recorded several hours of music from 1995-99 much of it still in the can. But Jabladav translated into much more. Although the band is no longer I have retained the spirt of those sessions into what is you now hear. Hope you enjoy the ride-J )